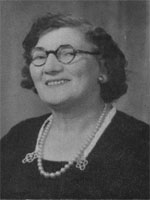 Jane Crumpton was born in 1882 in Middle Rainton, Durham. Her parents Eli and Mary Ann originally came from the Midlands.

The 1911 census records Jane living with the children and that she is married.

However, her husband, William, appears to be living with his mother, Stepfather and brother Joseph at 77, Second Street, Hornden Colliery in County Durham.

It records him as being single!

Jane’s own death was registered on 27 December 1952, in Poole, (by her brother James, who was living at 23, Walker Terrace, Houghton-Le-Spring, Durham).

The cause of death was from an aortic aneurysm, and she was recorded as being a widow, living in a house belonging to Bryanston School in Blandford Forum, Dorset. She died in The General Hospital, Longfleet Road, Poole, Dorset.

Her absent husband, William had died in January 1952 in Middlesborough.

According to the National Probate Register, she appeared not to have left a will so her estate was administered and proved by her son, Eli (Radio Officer), the effects £323 1s 11d.