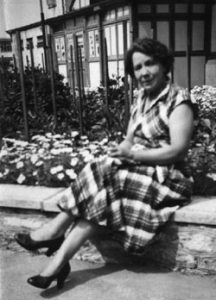 She was one of 11 children, the family having originally come from Chester.

Her parents were George Boardman and Mary Ellen Woodworth.

In the 1901 census – the family were living at 14 Chickwell Road, Weymouth, and her father, George was as an Engine Turner, at Whiteheads Torpedoes.

At the time of her marriage to Eli Windlow, she was a waitress in a boarding house.

They had 2 daughter’s, Evelyn and Pauline.

Then for some reason, the couple went their separate ways and Eva continued to live in Weymouth.

I remember visiting her many times for family holidays, and I never forget the house she lived in.

It was, for a small child, full of nooks and crannies, especially the dark cellar where Grandma would do her cooking.

On the odd occasion, I was allowed out into the small yard.

Grandma, by this time, spent all her days and nights in one room at the front of the house, and I recall being allowed to watch the 10 pm news before going back to the B&B we were staying in, around the corner.

It was always exciting to walk up to the big bay windowed house, the paintwork was green, and it had 2 or 3 steps leading to the door.

Mum would tell me stories about the 2nd World War, and a particular one about her finding dozens of American soldiers lined up outside the house, ready to go overseas, while she had to tread carefully between them to go to work, amongst all the wolf-whistles and other calls from the soldiers!